See all products of: Narciso Rodriguez

Narciso Rodriguez Musc Noir For Her 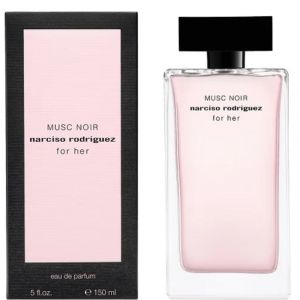 The new perfume by Narciso Rodriguez, for her MUSC NOIR, pays homage to the inner beauty of every woman. Inspired by her first perfume for her, MUSC NOIR reinterprets her codes by playing on the most intense and mysterious aspects of the iconic journey. This new chapter of the collection is an ode to the mysterious nature of female sensuality.

The intensity of the musk makes the perfume create even more addiction, painting the fascinating portrait of a modern and enigmatic femininity. For the first time, the iconic bottle for her is revealed in a play of transparency and appears in its purest form. The perfume inside is tinged with a delicate pink, in contrast with the black cap. Pure graphic object, it reveals a bold and intense light, sublimating the perfume.

Directions for use: Spray the perfume by placing the bottle at least 12-18 cm away from the chest or body. Point the nozzle at the point where you will vaporize it. If your skin gets wet when you spray the perfume, the bottle is; too close. For a more decisive fragrance, apply the perfume on the pulse points: neck, nape, wrist, forearm and behind the ears. Vaporizes in the void and crosses the perfume cloud for a more delicate result.

Or you were looking for..