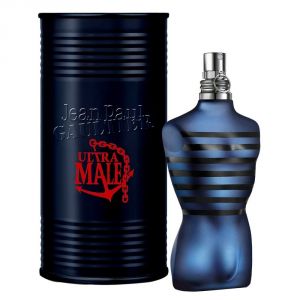 Ultra Male by Jean Paul Gaultier is an Eau de Toilette for a man belonging to the Eastern Fougère family. This reissue of the classic Le Male is a gift for his fans, on the occasion of his twentieth anniversary. The designer has decided to surprise us with this renewed version, more intense and with a greater power of seduction.

This fragrance was created in 2015 by the same master perfumer who created the previous version: Francis Kurkdjian. In this creation he wanted to pay tribute to a profile of a very virile man, what we could call colloquially a "heartthrob", a born conqueror, with an incredible ease in the field of seduction and which achieves all the objectives he proposes, collecting a success after another.

Its intense trail begins with fruity notes such as bergamot, pear, mint, lavender and lemon, which prepare the soil for an intense heart, with aphrodisiac notes, such as cinnamon, muscatel grass and cumin, a dark apotheosis that enhances all the senses , ending with an aura of mystery and seduction with black vanilla, amber, cedar and patchouli.

FEMALE PUBLIC. His sweet and mouth-watering notes have won over a vast following of admirers, who have confessed to using it on their own skin on special occasions.

SEDUCTIVE AND DELICATE. Although it has a very intense trail, it is a delicate and meticulously elaborated fragrance to never be too heavy.

STRIPED sailor. His bottle keeps the line that Le Male, a strong and sculpted male torso, in shades of blue, this time more intense, but always with the symbolic striped t-shirt of a sailor, engraved on the bust.


Directions for use: Spray the perfume by placing the bottle at least 12-18 cm away from the chest or body. Point the nozzle at the point where you will vaporize it. If your skin gets wet when you spray the perfume, the bottle is too close. For a stronger fragrance, apply the perfume on the pulse points: neck, nape, wrist, forearm and behind the ears.

Or you were looking for..